I woke up to a beautiful day for a bike ride. There was almost no wind; the sky was clear and the air was cool. I wanted to use the day to make up for a little lost time due to yesterday’s wind. I got a good, early start and rode the short distance to Fort Morgan, where I stopped to pick up a few things from a local bike shop. I needed to replace my rear view mirror and my frame pump. The part of the mirror that attaches it to my sunglasses broke yesterday evening when the wind blew my bike over with my helmet and glasses hanging from my seat. The shop didn’t have a mirror that would mount on my glasses, but did have one that mounted on my helmet. I figured I would give it a try and, if I didn’t like it, I could always replace it down the road. The mirror was terrible. Everything was fuzzy and I couldn’t really tell the distance of the cars behind me. I couldn’t even tell if something I saw in the distance was even a car. After a few miles, I stopped and attached my old mirror to my sunglasses with some duct tape. The frame pump also didn’t work properly. When I tried to use it, it ended up letting all the air out of my tire. 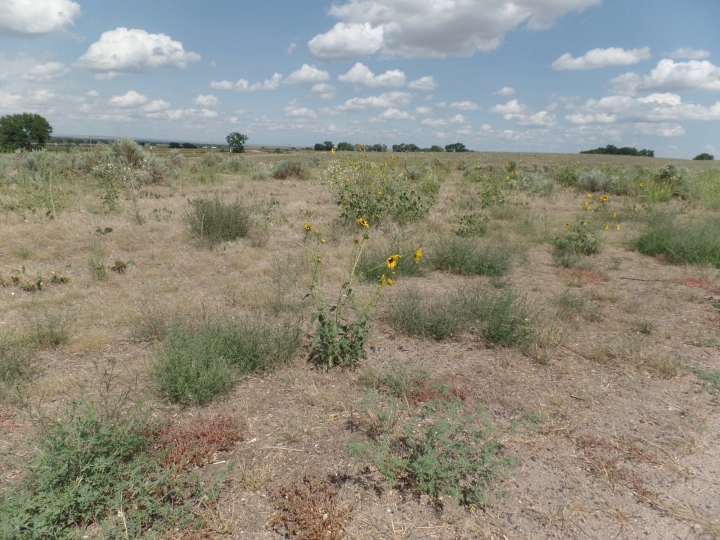 I continued on highway 34, expecting to make it past Greeley, CO. After Wiggins, there was a stretch of about 30 miles between Wiggins and the next town of Kersey. The map showed two town in between, Masters and Hardin. Masters is an intersection with one house. There is a highway sign there, just so you know you are in Masters. Hardin is actually off the highway a ways and may have been the same. I couldn’t see the town.

I stopped at Masters briefly for a break. While I was there, someone in a pickup stopped to let me know that there was a storm heading toward Greeley with quarter sized hail. I took a look at the radar, and it looked like it would go south of me, so I pushed on.

A few miles down the road, the wind began to pick up again out of the north, much like yesterday. About 13 miles outside of Kersey, when I was in the middle of nothing, the rain started and quickly became a heavy downpour. The worst of the storm did go west, then south, of me, but I had plenty of rain and strong winds.

I didn’t have anyplace to shelter and it didn’t look like he rain would let up anytime soon, so I put on my rain jacket and pushed on. The more I pedaled, the further away Kersey seemed to get. I kept thinking, “I must be about five miles away,” only to see something that would make me think I was actually seven miles away. That happened a couple of times as I struggled against the wind and rain. When I finally reached Kersey, I was cold, tired, hungry and mentally broken. I decided to get a motel room to get out of the wind and rain. There is only one motel in Kersey, and it was completely booked.

The staff was very sympathetic and very helpful. They let me use their internet to search for a motel in Greeley. When I found a room, I tried to get back on my bike. It was just another eight miles after all. I was so tired and cold, though, that I couldn’t even bring myself to get on the bike, let alone ride eight miles. I asked the staff if there was a taxi service that might be able to take me to Greeley, they found two numbers for me to try and let me use their phone because my cell phone was having trouble making calls. While I waited to hear back from the first taxi company, the evening manager looked to see if they had any rooms that were “out of order” and why they were out of order. She found one room that was marked as out of order because the air conditioning didn’t work. She asked if I wanted that room even without the air. Of course, I jumped at the opportunity. As cold as I was, I said I didn’t care about air conditioning for the night and she let me take that room. I don’t think I have been more relieved on this trip. I really don’t think I could have made it to Greeley.