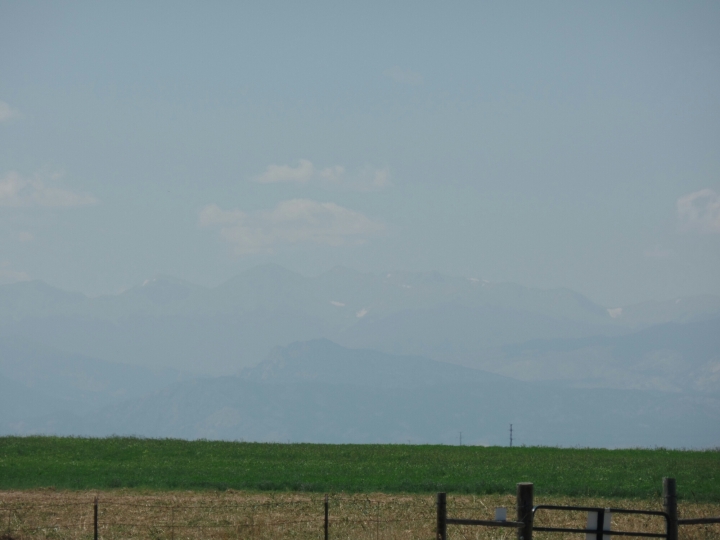 Once again, I woke up to a much nicer day than the evening before. The rain had cleared away and the sun was shining. Yesterday, I kept looking west trying to get a first glimpse of the mountains, but I think the storm blocked my view. When I walked outside this morning, there they were. They were still off in the distance and just a purple shadow on the horizon, but still pretty large.

I got off to kind of a late start after calling a bike shop in Berthoud. While visiting my sister, I desperately need to have some work done on the bike, especially since I will be heading into the mountains after the visit.

As I rode west, the mountains continued to get larger and more distinct. As I watched them grow, I began to wonder, “I have to ride through that mess?”

I took a county road west from Greeley, thinking there would be less traffic on it. It turned out to be a busy roadway, with no shoulders, which made the ride from Greeley to highway 287 pretty stressful. Once I turned south on 287, the stress disappeared. The highway had a nice wide shoulder and it was a short, five mile ride into Berthoud.

While at the bike shop, I saw another Bianchi Volpe, though it was a late 90’s model and mine is a 2010. I don’t see to many Volpes, so made a comment about it. The owner of the Volpe, Jay, was there to pick it up and we chatted for a bit. He offered to give me a ride to my sister’s place west of town, which I appreciated. I’ll stay with my sister until the bike shop is finished with my bike. Hopefully, it will be done in time for me to get back on the road Wednesday morning.

2 thoughts on “Approaching the Rockies (August 20)”