The local cyclists called it “Terrible Hill”. When I told a couple of them that I planned to ride south on Route 100 from Ludlow, they said, “Oh, you’re going to ride up Terrible Hill.” They did say that it wasn’t very long and, once on the other side, it is mostly downhill to Weston, VT. After the past few days, I was pretty confident that it wouldn’t be as bad as they said. The first couple of miles this morning, I kept thinking, “Why do they think this hill is terrible?” Then I hit it. First, there was a half mile with a 12% grade. That was followed by a short distance of relatively sane incline, then a mile of 9% grade. Like the locals said, it was short by distance, but it was appropriately named.

In Londonderry, I found a picnic table by a stream to eat lunch. After lunch, I headed west through the Green Mountains. I had another major climb this afternoon past the Bromley Mountain Ski Resort. It is the first time I have done two big climbs in the same day. I am starting to get into a rhythm when climbing. I still have to stop to catch my breath, but less often. Still, I ended the day completely and utterly exhausted physically. It feels kind of good to be so tired from physical activity. That is certainly not something I get in my normal life.

I did not take many pictures today. Things started to look the same. The same narrow highway through the same forest over the same mountains with the same wildflowers growing along the side. There were quite a few old sports cars along Highway 11, though. Unfortunately, they went by too fast to get any pictures. There was an antique car show in Manchester, VT, this weekend. I didn’t see where they were, though, so no pictures from after I got to Manchester. 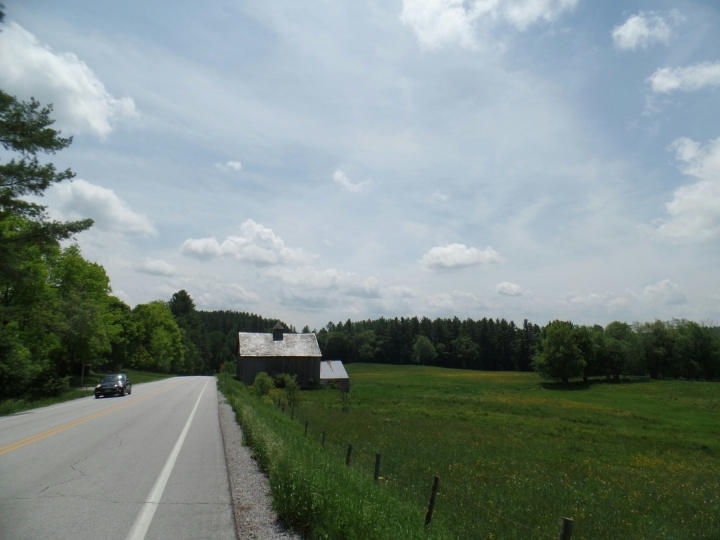 The hostel in Manchester I wanted to stay in was closed. I was exhausted and running low on water, so I stopped at a motel. I must have looked like hell because the guy running the place gave me the room for half the regular price.