There is something about the countryside of northwest Kansas that is very relaxing and very comforting. After I am done with this journey, maybe I will move back to the area. Probably not, but that was a thought I had today.

I have reached the part of the country where a majority of people driving the opposite direction wave. There have always been a few people who would wave, but the number has jumped sharply. I started to wave first, just so I didn’t miss anyone and look rude. I found out that, when I wave first, almost everyone waves back.

The humidity continues to drop. Even though it is hot, it really doesn’t feel bad and I don’t mind riding in this kind of heat. The sun can be a little oppressive, however. It can almost feel like something pushing down on my neck and body. I have a second bandana that I haven’t used yet. I put it under my helmet, hanging out the back and covering my neck. Even the little bit of shade provided by the bandana makes a big difference. As I continue across the country, I care less and less about what I look like while riding, especially if it helps keep me comfortable.

As I passed Bird City, KS, I saw a sign for a private campground and thought I would end the day there. Unfortunately, it was out of business. I continued west, looking for a place to camp. I saw one spot that probably would have worked, but it was early and I wanted to get a few more miles in while it was daylight. 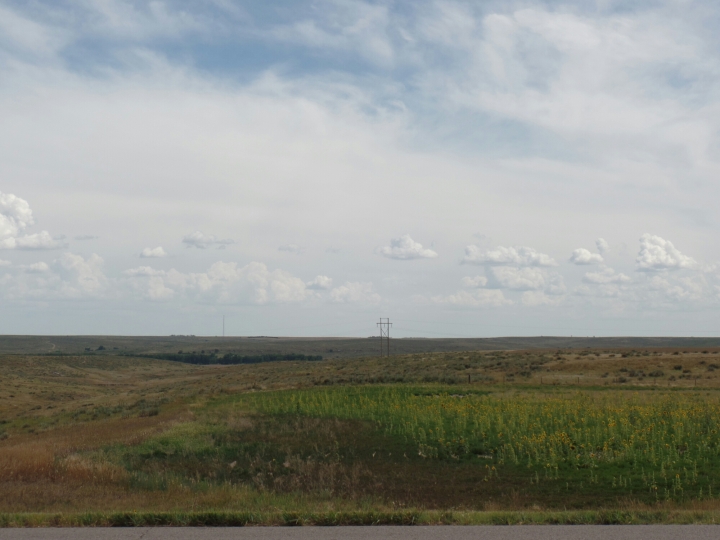 At one point on the ride, I smelled a strong odor similar to marijuana smoke. It was kind of a surprise because I wasn’t near any towns or houses. I know I’m getting closer to Colorado, but didn’t think I would be able to smell it so far away.

I ended up in St. Francis, KS for the night. I checked my elevation. I’m at almost 3400 feet, which is the highest I have been on this trip. That is several hundred feet above where I crossed the eastern continental divide and about 500 feet above the Kancamagus Pass.