I changed my intended route because of the heat. I had planned to head north to state highway 6, then west. After looking at what was ahead, I noticed there would be no place to stop in case the heat hit me like yesterday. The closest campground or motel was about 50 miles away. If I committed to that route, I would be locked into a long day. After yesterday, I felt I needed some options closer just in case. So I headed out of Hannibal on US 36. It is a four-lane divided highway, which I don’t particularly like, but it did have a nice shoulder.

Today was all about trying to figure out how to deal with the heat. The wind has been negligible. I would rather fight a headwind than have no wind in this heat because a headwind would at least help cool me down. I got on the road earlier, which helped. I think about another hour or two earlier would be better. That way, I can finish riding before the heat becomes oppressive. Today, I was about 5 miles outside Shelbina, MO when the heat got to me. With today’ earlier start, I did make decent progress.

Shelbina is in Shelby County and about seven miles south of Shelbyville. The people who settled this area were apparently not very creative with naming places. Of course, it’s not the only area in the country with a lack of creativity. If this was New England, there would be Shelbyville, South Shelbyville and probably something like West Shelbyville.

There are not as many wildflowers in Missouri, so far. However, the corn fields rising over the hills are nice to look at with their golden tops and green underneath. 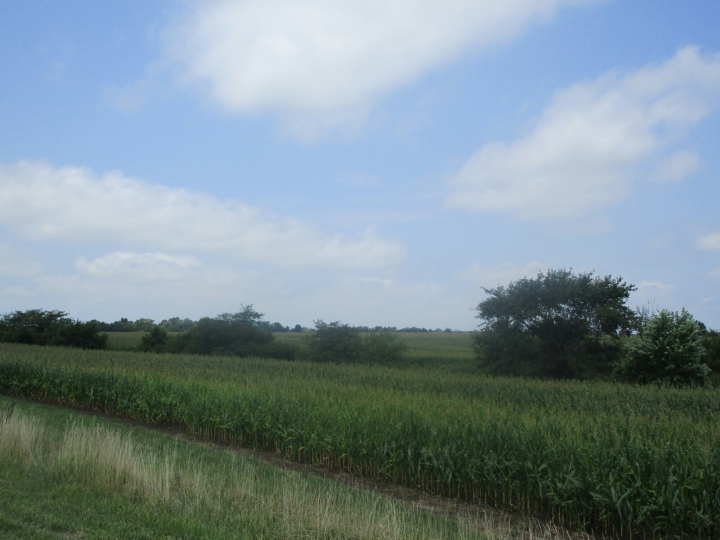