Today was kind of a confusing day. I was given advice to get from Boston to McKeesport. The trail volunteer said the GAP had a big climb, but if I crossed the river and took the loop trail, there was no climb. That sounded good to me. What he didn’t say was that the loop trail was very rough in areas and it would really rattled my bones.

At the campsite in Conellsville, there was a sign that indicated I had passed the last ridge of the Adirondack Mountains, but the hills around Pittsburgh looked pretty mountainous to me. I guess they are not real tall, just plenty steep.

I left the GAP for good at McKeesport. There is a series of on-road bike routes to connect to the Montour Trail that loops around the south and west of Pittsburgh. I wanted to take that trail to the Panhandle Trail which shoots west across the panhandle of West Virginia to the Ohio border. 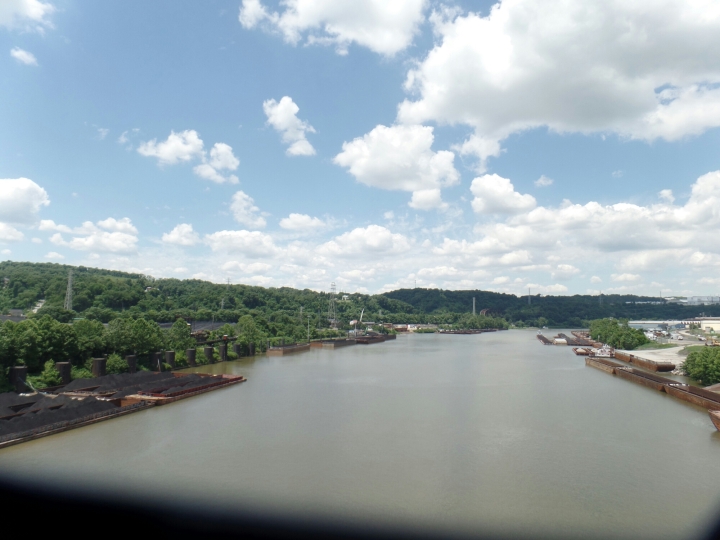 Once I finally got on the Montour, the trail looked mostly flat, with maybe a very slight incline. For some reason I was really struggling to make any distance and was taking frequent breaks. I couldn’t figure it out. I have only been on the road two days since my last rest day. I slept really well last night and felt great when I left this morning. It didn’t make any sense.

Then I must have crested a hill because cycling became really easy and my speed jump by 50%. The sudden and dramatic change made me realize that the slight incline must have been much steeper than I thought. After that I was able to react to the changes in slope better, knowing that regardless of how it looked, the uphills were going to require extra effort and lower gear. With my mind settled down, I was able to make better time and reached my goal for the day.

Since the Montour Trail goes through suburbs, it was pretty busy with bikers, walker and joggers. There were individuals, couples and families. At one point it took us behind a row of McMansions. I thought, people pay an awful lot of money to have cyclists and joggers look into their bedroom windows.

I have been on a trail of one kind or another for ten days. It was nice to be able to get through the mountains without any steep climbs or narrow roads. However, all they trail kind of look the same. I miss going through the different little towns and being able to see them. It will be nice to get off the trails once I reach Ohio.