I got a really late start today. I only planned to ride about 32 miles and thought I didn’t really need to get started early. The first stop was at the bike shop again to have my brakes looked at. I have noticed the past couple of days that my stopping power is pretty bad. They had to replace the rear brake pads and adjusted the front brakes.

Before leaving Cumberland, I stopped at a place called the Fruit Bowl hoping they would have some Diet Pepsi. Despite the name, the store was at least 75% candy, mostly pick-a-mix. I haven’t seen pick-a-mix in years. I got the Diet Pepsi, along with some locally made chocolate covered peanut butter squares. Delicious.

As the other cyclist in Little Orleans told me, the GAP is a much nicer surface to ride on. It is much smoother than the canal and has crushed gravel rather than sand and dirt. It was also mostly dry. Even the wet spots didn’t really have any mud. Between Cumberland and the Eastern Continental Divide, the trail was noticeably steeper, but not by much.

A few miles outside of Cumberland, I passed a family taking a brake. I recognized them from when they passed me when I was setting up camp just outside of Williamsport on my short day, so I stopped and chatted with them for a little bit. It turns out, before the kids were born, the mother and father (Joan and Eric) spent a little over two years cycling in different places around the world. While they didn’t go to any terribly remote places, like in Africa, Joan said the US seemed more difficult to cross than the other countries because the cities can be pretty far apart. Their favorite country was the Netherland because there are bicycle routes everywhere and an ice cream parlor or pancake shop about every three miles. Joan suggested I ride to Pittsburgh and get an international flight to somewhere else.

The GAP is quite a bit different from the canal. It is not as isolated from the cities you ride through. It follows the former route of the Western Maryland Railway, so it usually runs along the edge of town with a road into town. There are no hiker/biker campsites, which is kind of disappointing. However, the larger towns really roll out the red carpet for cyclists, with shaded benches, water and repair stations near the trail. Of course, they also have maps of the town showing all the lodging, restaurants, shops and other resources in the town.

I crossed the Mason-Dixon Line. I knew about it as the dividing line between the north and south before the civil war, but did not realize it was originally laid out to settle a dispute between the founding families of the Pennsylvania and Maryland colonies. An astronomer and surveyor took several years to lay out over 250 miles of chain along exactly the right latitude for the border between the two colonies. 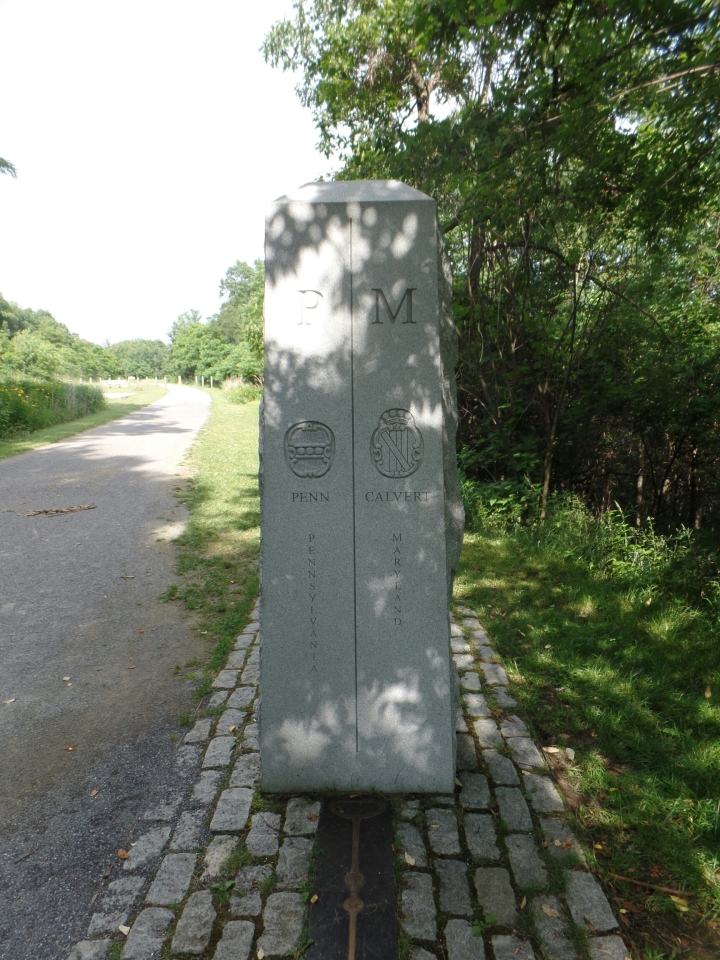 Where I passed the Eastern Continental Divide, everything to the east drains into the Chesapeake Bay and everything to the west drains into the Gulf of Mexico. Surprisingly, the Eastern Continental Divide at this point is actually about 400-500 feet lower in altitude than the Kancamagus Pass in the White Mountains. After that was a short, slightly downhill ride to Meyersdale, where I plan to take a rest day. As I was pulling into Meyersdale, the housing of my front derailleur cable split and caused my chain to be stuck on the lowest chain ring with no way to shift. I was still able to ride, but it was a bit like driving a car stuck in first gear, you don’t get anywhere fast.