I tried an experiment this morning for breakfast, rice with brown sugar, cinnamon and raisins. It tasted pretty good, but I don’t think I will make it a staple of my diet. I think I may have put too much brown sugar in it because it was awfully sweet.

I’m glad I did not try to crest the mountains yesterday. About a mile west of camp, the climbing became much steeper. It took me over two hours on fresh legs to go eight miles. Of course, once I crested the mountains, it took me about 40 minutes to do the remaining 15 miles into Lincoln, NH. At one point, I was rolling down the mountain at almost 40 miles per hour. 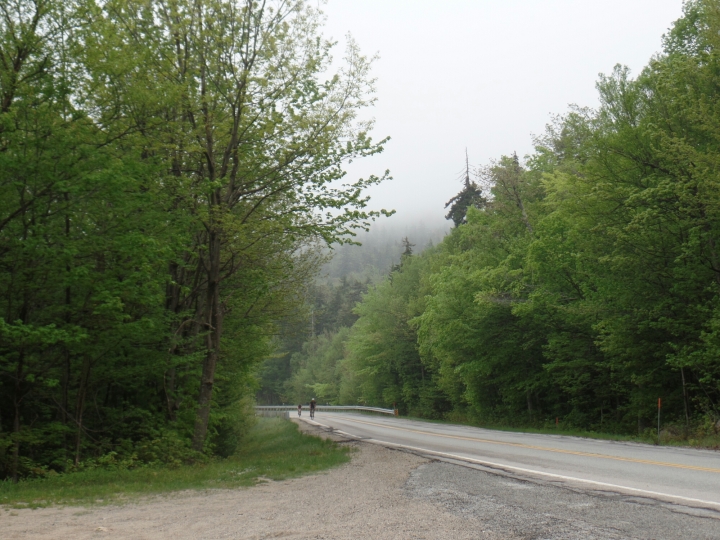 There were low clouds over the top of the mountains. I didn’t think anything of it when I started out this morning. By the time I got to the top of Kancamagus Pass, I was in the clouds. The fog was pretty thick and visibility low. I was a little concerned about being seen. Once over the pass, it didn’t take long to get out of the clouds.

Yesterday and today, I kept seeing “Moose Crossing” signs, but I haven’t seen any moose. I’m a little disappointed, no bears and no moose, so far.

I ended up spending about four hours in Lincoln running errands. I did not think it would take so long. I found a hostel along the route to stay in for the night. Since it is a holiday weekend, I was surprised they had space. It sounds like they were busy the last two nights, but not so much tonight. The hostel is near the Appalachian Trail and they are set up for through hikers staying here. They were not quite expecting someone to role in on a bicycle.